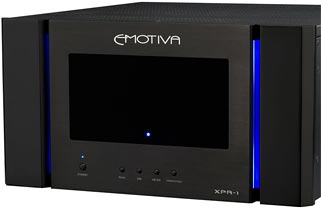 
You can never have too much power, they say at Emotiva and stick to that: With one thousand watts of power into 8 ohms and nearly two thousand watts into 4 ohms, the XPR-1 reaches new levels of realism and unlocks the true potential of high-resolution audio sources.

The XPR-1 Reference Series fully balanced mono-block power amplifier resets the bar when it comes to audiophile mono-block amplification. In terms of sonic refinement, the XPR-1's fully balanced Differential Reference design topology delivers pinpoint imaging and immersive detail together with a relaxed sense of authority. Only a carefully executed balanced design topology, backed by massive power reserves can convey this sense of realism and dynamics.

The XPR-1 represents the end game in audiophile amplification, and it is fully capable of driving the most difficult loudspeakers to their full potential. Like all Reference Series components, the XPR-1's are striking in appearance. They will become the focal point of your system.