Zimbabwe will not allow GMO grain 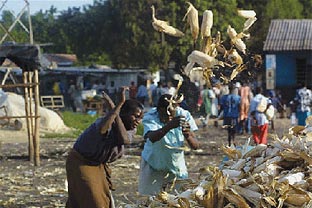 Zimbabwe will not allow the production of Genetically Modified Organisms (GMO) cereals in order to protect the local seed industry, said Agriculture Mechanization and Irrigation Development Minister Joseph Made.


The Zimbabwe government has been under pressure to allow the cultivation of GMOs since the country already consumes some GMO foodstuffs through imports from South Africa and other countries. It has been argued that allowing production of GMOs would go a long way towards increasing yields in a country with at least 2.2 million people facing food shortages.

The agriculture sector in Zimbabwe has been on the decline since the turn of the millennium because of limited funding and erratic rainfall patterns.

According to statistics from the Ministry of Agriculture, only 798,600 tonnes of maize, the staple food, were harvested in the 2012/13 season compared with 968,000 tonnes harvested in the 2011/12 season. In order to avert a food crisis, the government bought 150,000 tonnes of maize from Zambia, while the Grain Millers Association has also pledged to augment the government's efforts.

The minister told the National Assembly that embracing GMOs would be detrimental to the local seed industry which had sufficient capacity to produce high-yielding varieties of grain suitable to the climate and hence GMOs were not necessary.

"There is no shift on the policy that we will not accept GMOs. We will not accept the cultivation of GMO material," said Made, who added that instead of embracing GMOs, Zimbabwe should address issues that have inhibited growth of the agricultural sector.

"If the issue is high-yielding food varieties, we also have them. We can produce high-yielding seed varieties here. The potential is there. I will not preside over the destruction of that capability. What is critical for us is to squarely address the issues of irrigation, of inputs, of timely delivery of loans," said Mr. Made. ■

JoS. A. Bank at the top end of the projected EPS range