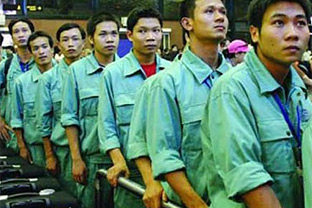 
The agreement was signed between Vietnamese Minister of Labor, War Invalids and Social Affairs Pham Thi Hai Chuyen and the RoK Minister of Labor and Employment, Phang Ha-nam, on Monday, under which qualified Vietnamese laborers will be sent to Korea in the last months of this year.

Accordingly, the nearly 12,000 Vietnamese workers who had worked in the RoK in compliance with their work contracts and returned to Vietnam on schedule, and passed the Employment Permit System (EPS) - TOPIK test in December 2011 and August 2012, will be the first candidates chosen by South Korean employers.

The two ministries also agreed to carry out another EPS - TOPIK test for those who have registered to take the examination. No test has been held in the past year since the two countries' agreement on the EPS program was not extended when it expired in August 2012.

South Korea is among the countries that receives the highest numbers of Vietnamese workers, and offers them salary rates that are high compared to other Asian countries. ■

Unilife to supply Sanofi for $15 million