US experts upbeat on China-US cooperation

Staff writer ▼ | February 23, 2015
Experts in the United States cautiously predicted a year of sustained dialogue and substantial cooperation between China and the US in 2015. 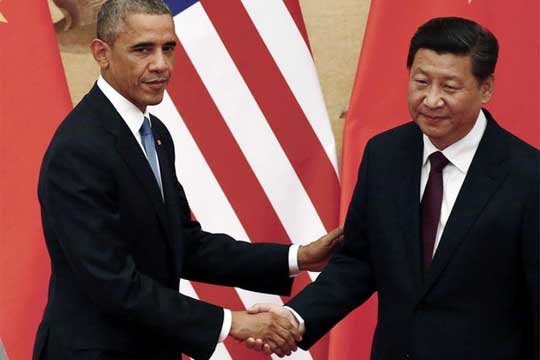 Very good news   A year of sustained dialogue
Optimism about a more amicable year for China-US ties was generated in early February when the two sides announced a state visit to the US by Chinese President Xi Jinping in September.

This will be the first state visit to the US by Xi, who already held an informal summit with US President Barack Obama at the Sunnylands estate in California in 2013 and another summit in Beijing last November.

The early announcement of this visit was interpreted by many as a desire by both sides to set the tone for a more smooth and fruitful year for the China-US relationship, which is often set back by recurrent tensions and disputes despite increasingly intertwined economic and trade ties and deepening cooperation on many international issues.

"What it does indicate is that there is a sustained dialogue between the US and Chinese leaders which is significant in the face of the tensions we've seen over the past year and the areas that both sides see as potential realms for cooperation," said Mark Cozad, senior defense policy analyst at the Rand Corporation.

"I think it's a realistic understanding by both sides that these high-level dialogues are essential for managing tensions and identifying and pursuing areas where cooperation might be possible," Cozad told Xinhua in an interview.

He said that despite the contentious issues of human rights, cyber security and territorial disputes in Asia, the leaders of China and the US have cooperated on climate change, denuclearization of the Korean Peninsula, the Iranian nuclear program and economic cooperation, where the "continued dialogue between the two presidents is essential."

Robert Daly, director of the Kissinger Institute on China and the United States at the Wilson Center, told Xinhua Xi's visit is expected to "advance cooperation in certain areas" because impending visit "can spur action and good behavior on both sides."

Douglas Paal, vice president for studies at the Carnegie Endowment for International Peace, said the China-US deal on climate change reached last November by the two presidents during Obama's visit to Beijing has already set the tone for "substantial cooperation" between the two nations.

"And that's going to continue through the year (ahead of the) Paris conference on climate change," Paal told Xinhua, referring to the United Nations-sponsored climate conference scheduled for late November in Paris, which aims to reach a universal deal on tackling climate change. ■

Trudeau to look at possible further aid for airlines
Iran warns U.S. of interfering with oil tankers
Turkey to open doors to 31 countries for health tourism
Italy to allow travel to and from other Schengen countries starting June 3