Ukraine to receive $30 billion from China

Staff writer ▼ | December 26, 2013
Ukrainian President Viktor Yanukovych's state visit to China has summed up the results of three years of work on the establishment of a strategic partnership between the two countries. 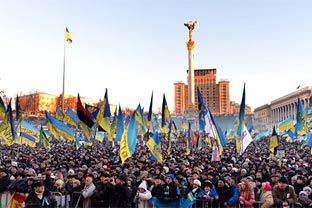 Ukrainian President Viktor Yanukovych's state visit to China has summed up the results of three years of work on the establishment of a strategic partnership between the two countries.


The agreements reached during the visit will help attract about $30 billion in Chinese investment in the Ukrainian economy.

This was stated by Ukrainian Deputy Prime Minister Yuriy Boiko, the press service of the Cabinet of Ministers reported. "The visit to China was a kind of summing up the results of three years of work of Ukrainian President Viktor Yanukovych and his team on the establishment of relations with China. It gave very good results. We received investment from China and signed about 15 documents, according to which Ukraine will receive about $30 billion in loans, investment and public-private partnership."

According to government analysts, joint projects include those on affordable housing, coal gasification plants, the Air Express project, the reconstruction of the coal industry, agriculture, and the construction of a port in Crimea.

This summer China approved the allocation to Ukraine of a $372 million loan for the implementation of the Air Express project. Control over the use of the loan will be conducted by the State Agency for Investment and National Projects of Ukraine and China's Eximbank.

It is planned to expand production facilities at Motor Sich (Zaporizhzhia) and create joint ventures that will help ensure the full cycle of building airplanes. The sides also reached strategic agreements in the mortgage sector. In particular, they signed a memorandum between the State Mortgage Institution and China's CITIC construction corporation on the construction of affordable housing in Ukraine. For this purpose, China will provide Ukraine with $15 billion for 15 years with the possibility of extending the project.

The sides also agreed on the entry of Chinese banks in the Ukrainian market and the opening of branches of Ukrainian banks in China. The sides signed a number of documents that will expand a range of product exports to China. Government analysts said that current annual volume of trade between China and Ukraine is $10 billion. Next year this figure will triple, to $30 billion. ■