Turkey to doctors: Provide first aid and you'll pay $1m and end up in jail

Staff writer ▼ | January 19, 2014
A medical bill has been signed into law in Turkey that requires doctors to obtain government permission before administering emergency first aid. 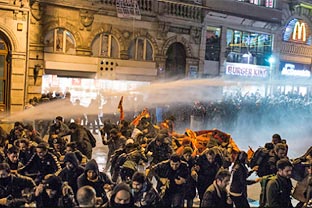 A medical bill has been signed into law in Turkey that requires doctors to obtain government permission before administering emergency first aid.


The bill, which was drawn up by the ruling Justice and Development Party (AKP), punishes health care professionals with up to three years in prison or a fine of almost $1 million if they administer emergency first aid without government authorization.

It also bans doctors from practicing outside state medical institutions and aims to stop them from opening private clinics. President Abdullah Gul signed the legislation into law Friday. It has prompted a flurry of accusations from rights groups, condemning it as an attempt to criminalize emergency health care and deter doctors from treating protesters.

Physicians for Human Rights (PHR) has described the law as another attempt by the government of Prime Minster Recep Tayyip Erdogan to silent dissent.

"Passing a bill that criminalizes emergency care and punishes those who care for injured protesters is part of the Turkish government’s relentless effort to silence any opposing voices," said PHR senior medical advisor, Vincent Iacopino, who added, "This kind of targeting of the medical community is not only repugnant, but puts everyone’s health at risk." ■

China attacks Google and Apple with its own phone OS