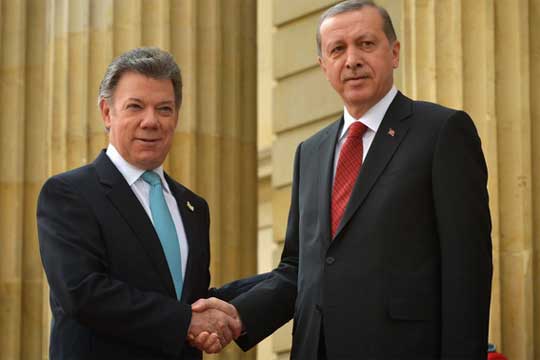 Cooperation   Recep Tayyip Erdogan and Juan Manuel Santos Calderon
Erdogan was welcomed in a military-style ceremony and said he was thankful to Colombia. Calderon said that Erdogan’s visit was important, as it is the first visit by a Turkish president and comes during Turkey’s interim presidency of the G20 group.

Erdogan said that a number of significant agreements between the two nations had been signed.

"We have signed cooperation agreements in various fields including in the agricultural, livestock and fishing industries," Calderon said, adding that Turkey has become Europe’s leading nation in these fields.

The agreements include the Turkey-Colombia Cooperation Framework Agreement, a plan for cultural cooperation, a memorandum of agreement in the tourism sector and a memorandum of understanding in the agriculture field.

"Colombia has transformed into a dream come true," Erdogan said. "Colombia instills hope and excitement in its zone."

Erdogan said that only three Turkish construction companies are active in Colombia, which he said was insufficient. He also asked more Colombian companies to invest in Turkey.

The Turkish president also said that the Turkish Cooperation and Development Agency (TIKA) will establish a branch in Colombia soon.

"Our TIKA office will cooperate with Colombia in the fields of education, culture and all others," he added. "Turkey and Colombia have signed a letter of intent to promote the Spanish language." ■

Anadarko announces board of directors election and retirement