Staff Writer | November 6, 2017
Visiting U.S. President Donald Trump took aim at Japan on Monday for what he described as one-sided trade deals with the United States. 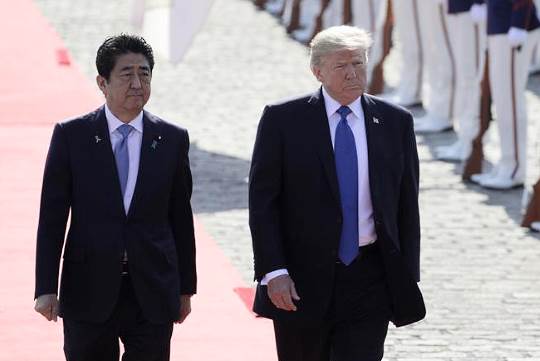 America   Japan had a $69 billion trade surplus
Trump made the remarks at a consortium of U.S. and Japanese business leaders ahead of his summit meeting with Japanese Prime Minister Shinzo Abe in the afternoon.

"Japan has been winning on trade in recent decades," Trump said, adding that he wanted to push for more reciprocal trade between the two countries in a friendly way.

Japan had a $69 billion trade surplus with the United States last year, according to the U.S. Treasury Department.

"The United States has suffered massive trade deficits with Japan for many, many years, almost 70 billion (U.S. dollars) annually," Trump told the business leaders at the U.S. ambassador's residence in Tokyo.

"We want fair and open trade, but right now our trade with Japan is not fair and it's not open," he said. "But I know it will be soon." ■