Staff writer ▼ | March 10, 2015
After three days of closed-door talks, Sudan, Egypt and Ethiopia on Friday reached an agreement in principles on sharing the Nile water and the Great Ethiopian Renaissance Dam (GERD). 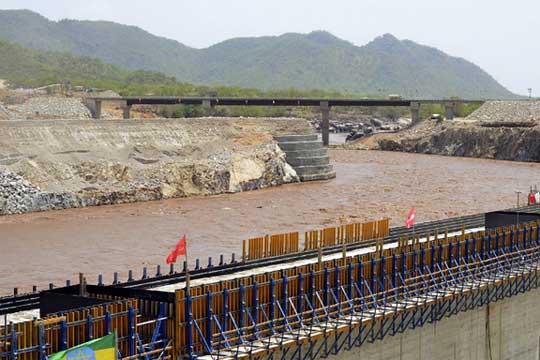 "The agreement among the eastern Nile basin countries made during the ministerial talks on the GERD represents a new page of cooperation among Egypt, Sudan and Ethiopia," said Ali Karti, Sudan's foreign minister, at a joint press conference.

The Sudanese minister further expressed hope that the agreement would also boost communication, saying "we have to work to surpass the distance between us in the past to achieve maximum utilization of this important resource."

In the meantime, the team of national experts from the three countries are to begin meetings on Friday in Khartoum to discuss the offers presented by four consultative offices which made research about the GERD and its probable impacts.

Saif-Eddin Hamad, a Sudanese water expert, told Xinhua on Friday that the agreement indicates once again the important role Sudan is playing in its attempt to unite the countries of the Nile Basin.

Egyptian Foreign Minister Sameh Shoukry said "this agreement is a beginning for further political and technical cooperation. The agreement addresses the concerns of the two downstream countries, Sudan and Egypt."

Ethiopian Foreign Minister Tedros Adhanom, for his part, expressed his country's satisfaction over the outcome of Khartoum talks, noting that the reached agreement represented a new path in the course of the strategic relationship among the three countries.

The GERD, extending on an area of 1,800 square km, is scheduled to be completed in a period of three years at a cost of 4.7 billion U.S. dollars. So far, around 30 percent of the dam project has been finalized. ■

Climate changes are speeding up, faster than historical levels