Staff writer ▼ | April 15, 2015
The South Korean government is going to construct a natural gas plant in Turkmenistan, which has the world's fourth largest natural gas reserves. 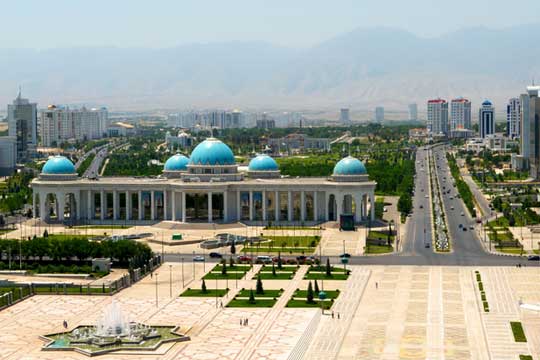 South Korean President Park Geun-hye and her Turkmenistan counterpart, Kurbanguly Berdymukhamedov, had a meeting and agreed on the diversification of economic cooperation between the countries through the enhancement of energy and financial cooperation, and trade and investment regulations.

The two countries made eight agreements in total including a Double Taxation Agreement (DTA), avoiding the double taxation of income and property between the two countries; science and technology cooperation agreement; financial cooperation memorandum of understanding (MOU); and steel production plant construction MOU.

The natural gas-to-liquids (GTL) plant construction will be completed by a consortium of LG International Corp. and Hyundai Engineering in cooperation with Turkmenistan's Ministry of Oil, Gas, and Mineral Resources (MOGMR), to the tune of about $4 billion.

The consortium and MOGMR also concluded an agreement on a project for the second modernization of Türkmenbaşy's refinery. A consortium of Daewoo International Corporation and POSCO E&C and the Ministry of Industry of Turkmenistan concluded an MOU for a project to construct a steel plant that is $1 billion in scale.

Moreover, the Blue House of South Korea is pursuing a $7 billion dense polyethylene and polypropylene deal for materials to be produced at a petrochemical plant in Kiyanly, Turkmenistan, to be built in 2018.

South Korea and Turkmenistan also concluded a financial cooperation MOU, where the Korea Trade Insurance Corporation and Korea Exim Bank will provide finance for Turkmenistan government's gas and petrochemical projects. The countries also concluded a DTA in order to expand trade and investments.

Particularly, the financial cooperation MOU is expected to effectively provide the necessary finance for Turkmenistan's projects in which South Korean companies participate. The MOU is also expected to increase South Korea's Central Asian projects as well as its entrance into emerging markets. ■

Lord Browne and Tidu Maini to step down from Riverstone Energy