South Korea to go to space to boost economy

Staff writer ▼ | July 15, 2013
South Korean President Park Geun-hye announced that the country will have a lunar orbiter by 2020 and a lunar rover by 2025. The decision about lunar exploration came five years ahead of schedule. 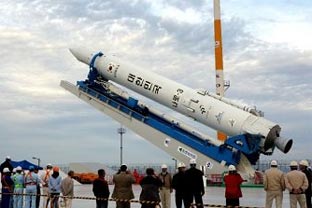 South Korean President Park Geun-hye announced that the country will have a lunar orbiter by 2020 and a lunar rover by 2025. The decision about lunar exploration came five years ahead of schedule.


It is estimated that the program will cost approximately $446 million (500 billion won). The development is to begin in earnest in 2015. Many people, including those within the country, oppose the plan, and doubt Seoul's ability to realize the mission.

The South Korean government advanced the program for several reasons. First, South Korea's economy has been stagnant since the global financial crisis, so it has to seek alternative means to recover and stimulate domestic economic growth. Developing space technologies will help create a new industry and inject vigor into its economy.

Second, despite being a capitalist country, South Korea has a lot in common with socialist nations. Its government could manage to reach consensus with the public in formulating and implementing plans, which will benefit the smooth implementation of the lunar program.

Meanwhile, China and Japan, as regional powers and South Korea's neighbors, have made obvious achievements in space, while North Korea has put pressure on the South with its successful satellite launch.

South Korea has dreams of being a "great power," and the lunar project will definitely help with this aim. However, the country has substantial problems in terms of technology and budget in advancing the lunar project. It collaborated with Russia in launching the Korea Space Launch Vehicle-1, but Russia was reluctant to share all its space technologies.

The South Korean research team has chosen NASA as a key partner. The US will transfer some of its technologies, as this will ease some of its pressure when South Korea becomes strong enough to contain the North. ■