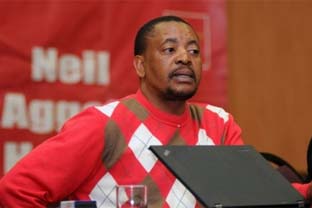 South African Food and Allied Workers Union (FAWU) threatened to take mass action against the EU over a citrus dispute.


The Food and Allied Workers Union (FAWU) said it is in full support to concerns raised by South Africa's citrus industry that the EU is using the "black spot" in oranges to limit the imports of the country's citrus.

Katishi Masemola from the country's Food and Allied Workers Union (FAWU), said the move by the EU had compelled FAWU to urge the South African government to intervene against EU's policy.

"Given this, FAWU calls on South Africa government to leave no stone unturned in confronting the EU on its unfair trade protectionist stance in the name of health and safety standards because this black spot argument is not even taken serious by the United Kingdom.

"As FAWU, we will call on our fraternal unions in the EU to put pressure on their EU member-states' governments to move away from such trade relations practices with South Africa and countries from the developing world," said Mr. Masemola. ■

Victory adds Ralph Kehle to its board of directors