Staff Writer | May 11, 2018
Singapore and Brazil have signed a comprehensive bilateral Avoidance of Double Taxation Agreement (DTA), as part of the ongoing effort to further facilitate bilateral trade and investment cooperation. 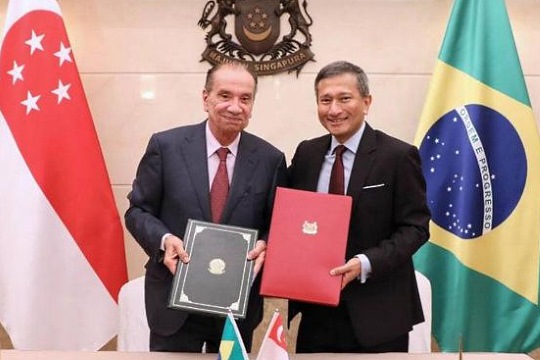 Cooperation   The largest source of frozen chicken
The document was inked in Singapore by Foreign Affairs Minister Vivian Balakrishnan and his Brazilian counterpart Aloysio Nunes Ferreira. The latter was on a three-day official visit.

In a statement, Singapore's Ministry of Foreign Affairs (MFA) said that the two countries also welcomed Singapore's removal from Brazil's list of low tax jurisdictions. They also look forward to the early ratification of the DTA.

Brazil - Singapore's largest source of frozen chicken, beef and pork - is Singapore's third-largest trading partner in Latin America. According to latest figures, the trade in goods amounted to US$3.4 billion (S$4.57 billion) in 2017.

Since 2004, bilateral trade in services has grown at a compound annual growth rate of 33.9 per cent, reaching US$1.7 billion in 2016. Bilateral investment has also been "growing steadily", said the MFA.

Singapore and Brazil have welcomed initial discussions on a free trade agreement (FTA) between Singapore and the four-nation Mercosur bloc, with the aim of launching a first round of negotiations in the third quarter of 2018. ■