Scotland has voted No to independence

Staff writer ▼ | September 19, 2014
Scotland has voted to stay in the United Kingdom after rejecting independence. The winning total needed was 1,852,828 and the margin of victory in the whole country is about 55% to 45%. 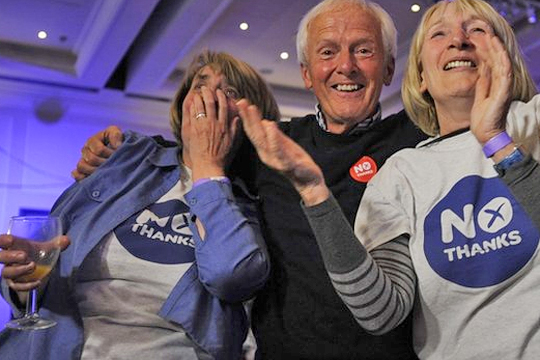 Referendum   55% voted for Scotland to stay in UK
In his first public comment since the results started coming in, Scottish First Minister Alex Salmond, who led the pro-independence "Yes" campaign, tweeted: "Well done to Glasgow, our Commonwealth city, and to the people of Scotland for such incredible support."

Mr. Salmond's deputy, Nicola Sturgeon said there was a "real sense of disappointment that we have fallen narrowly short of securing a 'Yes' vote". She told the BBC the projected result was "a deep personal and political disappointment" but said "the country has been changed forever". She said she would work with "anyone in any way" to secure more powers for Scotland.

With 30 out of the country's 32 council areas having declared, the "No" side has a lead of 1,877,252 votes to 1,512,688. This margin of victory is some three points greater than that anticipated by the final opinion polls.

Glasgow, Scotland's largest council area and the third largest city in Britain, voted in favour of independence by 194,779 to 169,347, with Dundee, West Dunbartonshire and North Lanarkshire also voting "Yes".

Edinburgh, the nation's capital, rejected independence by 194,638 to 123,927, while Aberdeen City voted "No" by a margin of more than 20,000 votes. There have also been big wins for the pro-UK campaign in many other areas. ■

UK says independent Scotland would lose the pound
Scottish people not for union, not for independence
British gov't promises more power to Scotland