Staff writer ▼ | June 26, 2014
Rwanda and Uganda have signed a consultancy services contract for the preliminary design of the Kigali-Kampala standard gauge railway. 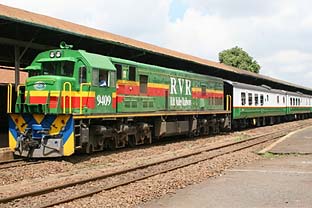 Rwanda and Uganda have signed a consultancy services contract for the preliminary design of the Kigali-Kampala standard gauge railway.


The proposed standard gauge railway, to be completed by March 2018, will stretch from Mombasa through Nairobi to Kampala, Kigali and Juba. Following a bidding process, a German consulting firm, Gauff Ingenieure, was awarded the contract that will see the electronic railway line linked from Bihanga in western Uganda to Kagitumba and Kigali.

"This is another demonstration of the strong commitment of our leaders to carrying out joint regional integration projects aimed at easing trade in the region," said Guy Kalisa, the director-general of Rwanda Transport Development Agency.

Director-general said Rwanda and Uganda will share the Euro6.3 million (about Rwf5.8 billion) cost of the designs of the railway. Rwanda will pay Euro1.4 million, while Uganda will cater for the rest. "We are still at the level of the designs. We will know the total cost of engineering and procurement after the consultants have given their advice on the routes and alignment from Kagitumba to Kigali."

The railway will replace the existing 100-year old metre gauge railway (Kenya-Uganda) and will enable the operation of longer, heavier and faster trains. The Nairobi-Kigali railway is estimated to cost about $13.5 billion and will be financed by the three countries. ■