Staff writer ▼ | July 17, 2014
The Kremlin has blasted significantly strengthened U.S. and EU sanctions against Russia for its actions in Ukraine. 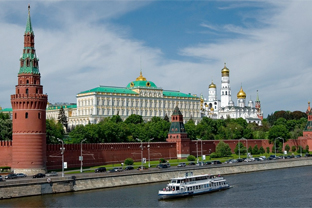 The Kremlin has blasted significantly strengthened U.S. and EU sanctions against Russia for its actions in Ukraine.


The Russian Foreign Ministry called the sanctions a "primitive attempt to take revenge for the fact that events in Ukraine are developing differently from Washington's scenario," adding that "we do not intend to tolerate blackmail and reserve the right to take retaliatory measures."

The ministry added, "We have said many times that speaking with Russia in the language of sanctions, whatever their scale, is useless."

Washington announced new sanctions that for the first time directly target Russia's banking, military, and energy sectors. The sanctions affect a range of Russian companies, from armaments producer Kalashnikov to energy companies such as Rosneft and Novatek.

The Foreign Ministry also chided the European Union, saying Russia is disappointed that the EU "succumbed to U.S. blackmail."

Prime Minister Dmitry Medvedev characterized sanctions as "evil" and said such measures could never bring anyone to their knees. ■

Baroness Noakes to retire from Carpetright