Staff writer ▼ | January 10, 2014
Ukraine has ceased buying gas from Europe and will instead purchase the fuel solely from Russia, as it offers the lowest prices, Ukraine's energy minister said. 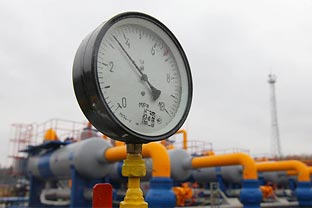 Ukraine has ceased buying gas from Europe and will instead purchase the fuel solely from Russia, as it offers the lowest prices, Ukraine's energy minister said.

Kiev has been buying gas from Poland and Hungary over the last two years and was close to striking another gas deal with Slovakia in a bid to reduce its dependence on Russian supplies, amid political tension over Ukraine's previous policy of gradual economic alignment with Europe.

Ukraine was expected to sign an association agreement with the European Union in November, but President Viktor Yanukovich dropped the deal at the last minute, instead striking a $15 billion aid package and gas discount agreement with Russia in December.

Russia agreed to drop its gas prices for Ukraine from $400 per 1,000 cubic meters to $268 starting January 1, in a deal between Ukraine's state energy firm Naftogaz and Russia's Gazprom formalized on Thursday.

The new price level must be confirmed every quarter, according to the agreement, giving financial leverage for Moscow to deter Kiev from seeking closer ties with the EU in the future. Ukraine stopped buying European gas at the start of January, Ukrainian news agency UNIAN reported, citing operational data from gas transmission systems in Hungary and Poland. ■

Danone to bring Fonterra to court