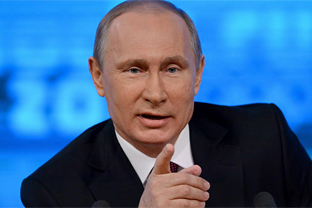 Russian President Vladimir Putin said U.S. pressure on French banks is blackmail linked to Paris's controversial decision to press ahead with a sensitive deal to supply Moscow with warships.


"This does not concern us directly but what they are doing to French banks right now - this causes nothing but indignation in Europe and here. We know of the pressure that our American partners are putting on France so that they don't send the Mistrals to Russia.

"And we know they hinted that if they don't send the Mistrals to Russia then sanctions will be slowly lifted from the banks, or reduced to a minimum. What is that if not blackmail?" said Mr. Putin.

His comments came after leading French bank BNP Paribas pleaded guilty Monday to US criminal charges of violating sanctions on Iran and Sudan for eight years and was fined a record 8.9 billion ($9.6bn).

France has vowed to stick by a €1.2bn ($1.6bn) contract to build two Mistral warships for the Russian navy despite U.S. objections to the project. ■