Putin: No one can intimidate or isolate Russia

Staff writer ▼ | December 22, 2014
President Vladimir Putin has warned that no country can "intimidate" or "isolate" Russia. 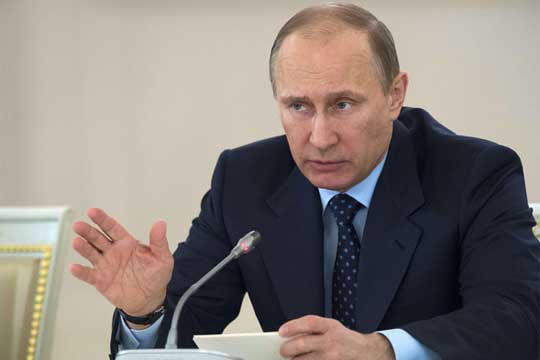 Advice to the world   Russian independence on stake
Mr. Putin said such attempts had repeatedly been made over the centuries. He said that currently "open calls are being made to make Russia pay dearly for its independent stance, for the support of its compatriots, for Crimea, for Sevastopol, and for our mere existence."

Mr. Putin, in an address to mark the national holiday of Employees and Veterans of Russia's Security Forces said: "Of course, no one will be able to intimidate us, or contain and isolate Russia. No one has ever been able to and no one ever will."

He called for improvement of Russia's secret services to tackle "modern challenges and threats" amid tensions with the West over the Moscow's role in the Ukrainian crisis.

Putin said the most important tasks for Russia's intelligence services were the fight against global terrorism and the prevention of "any attempts of foreign special services to deal a blow to Russia and her political and economic interests." ■

Putin: If other countries remove sanctions, we will too
Merkel meets Putin, ties to be bit warmer
Russia to continue to supply Europe with gas

Poor sleep at home, terrible performance in the office