Staff writer ▼ | September 22, 2014
During a meeting with the visiting Crown Princess of Sweden Victoria, President of Latvia Andris Berzins said that he sees Sweden as a good partner in finding new export markets. 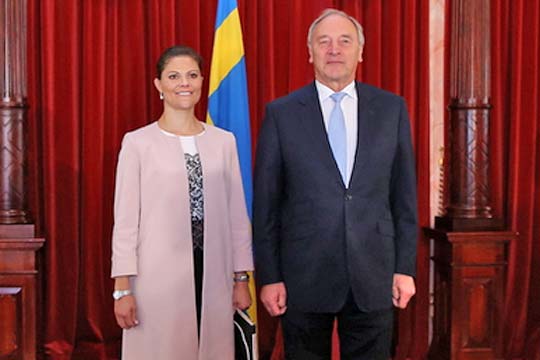 Meeting   The successful and productive visit
As LETA was informed by the Presidential Press Service, at the beginning of their meeting, both sides expressed satisfaction as the excellent and friendly bilateral relations between Latvia and Sweden on all levels.

Meanwhile, the president, in speaking about the relations between the two countries, pointed out to the fact that Sweden is the largest foreign investor in Latvia, and is a main player in the country's financial and banking sector. At the same time, Berzins said that he sees Sweden as a good partner in finding new export markets in the future, like, for example, Latvia has done in Central Asia, but Sweden in Africa.

At the same time, the president invited Princess Victoria to attend next year's forum on the EU's strategy in the Baltic sea region, which will take place in Riga. The princess admitted that the future of the Baltic sea is one of the causes that she is personally involved in.

As reported, Victoria, Crown Princess of Sweden has arrived to Latvia for a one-day working visit today.

The Foreign Affairs Ministry's spokesman Karlis Eihenbaums told LETA that Victoria's visit in Latvia had been in planning for some time, and that she had showed particular interest in Riga as the European Capital of Culture.

During her visit to Latvia, the Crown Princess of Sweden will visit the Latvian National Library and the former KGB building in Riga, also known as the Corner House. ■

PepsiCo elects David Page to board of directors