OECD: India to grow below trend

Staff writer ▼ | February 11, 2014
Indian economy's growth is expected to be "below trend" even as neighbouring China and most of the developed nations are expected to see better prospects, according to OECD. 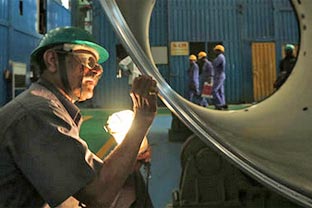 Indian economy's growth is expected to be "below trend" even as neighbouring China and most of the developed nations are expected to see better prospects, according to OECD.


The conclusions are based on Composite Leading Indicators (CLIs), which are designed to anticipate turning points in economic activity.

"In the emerging economies, the Composite Leading Indicators (CLIs) point to growth around trend in China, Brazil and Russia, and to growth below trend in India," OECD said. India's CLI slipped to 97 in December last year from 97.2 registered in November. The country's CLI has been falling since August 2013 when it stood at 97.7. It dropped to 97.5 in September and then to 97.4 in October.

The OECD assessment comes at a time when the Indian economy is expected to clock a growth of 4.9 per cent in the current financial year ending March 2014, higher than 4.5 per cent GDP expansion recorded in the year-ago period, as per advanced estimates released from the Central Statistics Office.

Meanwhile, OECD said most advanced economies continue to show signs of an improving economic outlook. "The CLIs continue to point to economic growth firming in the United States and the United Kingdom and to growth above trend in Japan. In the euro area as a whole, and in France and Italy, the CLIs continue to indicate a positive change in momentum. In Germany, the CLI shows signs of firming growth."

These readings also indicate that a re-balancing is happening in the global economy with better growth anticipated in the developed world than in the developing countries. ■