Staff writer ▼ | May 7, 2013
The government of Norway said it would increase taxes on oil companies and multinationals to finance tax relief to its mainland industry. 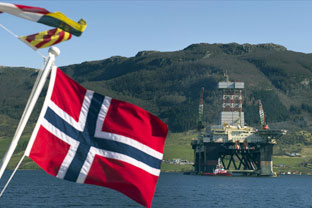 The government of Norway said it would increase taxes on oil companies and multinationals to finance tax relief to its mainland industry.


"Some sectors are performing very well, pushing prices and salaries higher. At the same times, businesses that can't increase prices because they depend on global markets are squeezed by high costs and lower demand from abroad," said Prime Minister Jens Stoltenberg.

The government would like to reduce the general corporate tax to 27% from 28% as of 2014. This would shave 2.4 billion krone off the annual tax bill for the home industry and NOK500 million annually for self-employed. Oil companies would not benefit from the cut because it was offset by an increase in the special petroleum tax to 51% from 50%.

Sweden recently cut its corporate tax to 22%, and Denmark plans to reach the same percentage by 2016.

The 24 oil projects under development offshore Norway have experienced cost overruns of NOK49 billion ($8.4 billion), according to government figures. Mr. Stoltenberg said "90% of this is paid for by the society."

Oil companies would still be able to deduct most of their investment costs, but slightly less than before. By reducing a tax deduction called the "uplift," oil companies' tax bill was expected to increase by NOK70 billion in current value between 2013 and 2050, the government said, or slightly below NOK3 billion annually.