Staff writer ▼ | December 17, 2014
Nicaraguans once again expressed their dissatisfaction with a $40 billion Nicaragua Grand Canal project by staging a protest in Nicaragua's capital of Managua, according to Inside Costarica. 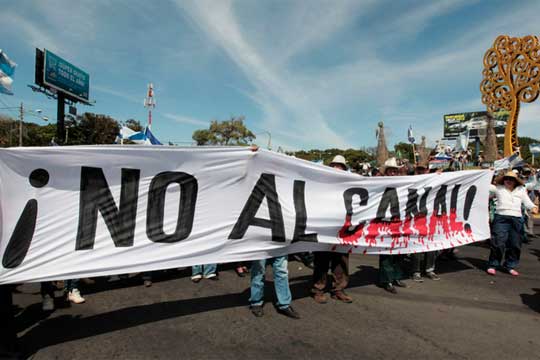 Protests   Work on the Nicaragua canal will start on December 22
The protesters expressed their concern over the effect of the Canal to local freshwater resources and the environment.

Work on the Nicaragua canal will start on December 22, with the initial phase taking place at a port on the country's southern Pacific coast, according to Zhu Xiaoya, an official with Hong-Kong-based HKND group, which was chosen to construct the Canal.

Environmentalists and certain Nicaraguan politicians have also expressed their concerns with the project, questioning the Canal's impact on the environment, as well as the lack of experience of its Chinese developer with large infrastructure projects.

Residents along the route have staged numerous protest marches to voice their opposition.

The Nicaragua Grand Canal will be three times longer than the Panama Canal, with the ability to accommodate ships up to 400,000 tonnes. ■

Call for more Made in Ontario products