Staff writer ▼ | March 17, 2015
The membership of the Asian Infrastructure Investment Bank (AIIB) is set to expand further, with France, Germany and Italy reported to have all agreed to join the China-proposed institution. 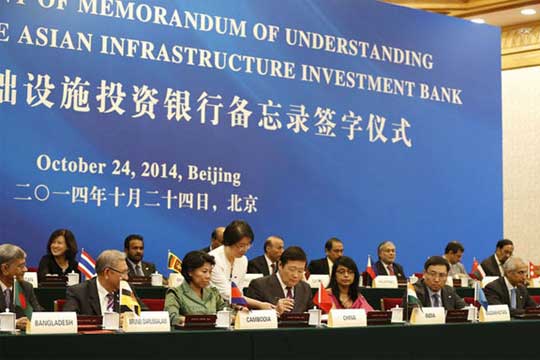 Cooperation   Asian Infrastructure Investment Bank
The decision of the three European countries, which was revealed by British newspaper The Financial Times and yet to be officially announced, came in the wake of Britain's application last week to be a founding member of the $50 billion bank.

Meanwhile, Australian leaders have been lining up in the past few days to voice support for joining the AIIB, which marks a conspicuous U-turn from the cabinet's previous stance.

"Our position all along has been that we are happy to be part of some thing which is a genuine multilateral institution such as the World Bank, such as the Asia Development Bank," Prime Minister Tony Abbott said during an interview with Sky News over the weekend.

In addition, South Korea, Switzerland and Luxembourg have reportedly been pondering whether to join the new international initiative.

As regards Japan, Chinese Finance Minister Lou Jiwei said earlier this month that the chance to be an AIIB founding member is available for all Asian countries including Japan by March 31, and the ball is in Japan's court.

"They told us they are considering. Whether Japan will join, we do not know. It is Japan's own decision," Lou said.

Nearly 30 countries have confirmed their participation in the AIIB, which is aimed at helping finance infrastructure projects across Asia and expected to come into being within 2015. ■