Staff writer ▼ | December 18, 2013
Moody's Investors Service has downgraded the Government of Venezuela's local and foreign currency ratings to Caa1 from B1 and B2 respectively. The outlook on both ratings remains negative. 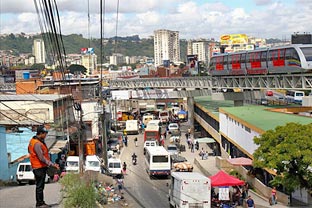 Moody's Investors Service has downgraded the Government of Venezuela's local and foreign currency ratings to Caa1 from B1 and B2 respectively. The outlook on both ratings remains negative.


The key drivers for the action are increasingly unsustainable macroeconomic imbalances and materially higher risk of an economic and financial collapse.

The downgrade reflects Moody's view that Venezuela is facing increasingly unsustainable macroeconomic imbalances, including a skyrocketing inflation and a sharp depreciation of the parallel exchange rate. As government policies have exacerbated these problems, the risk of an economic and financial collapse has greatly increased.

Inflation is out of control having crossed the 50% mark. The parallel exchange rate has risen to 64 bolivares to the dollar, 10 times the official rate, from 17.5 at year-end 2012. Widespread shortages of various categories of goods have forced the government to ramp up imports.

Venezuela's external position has deteriorated as well. The current account surplus shrank by 35% through the past three quarters relative to the same period last year, and liquid financial assets continue to decline. Though the country still has a substantial amount of gold reserves and other liquid assets, foreign exchange reserves have reached perilously low levels.

Growing macroeconomic imbalances and distortions have taken a severe toll on growth. While the economy has been able to escape a recession, GDP growth was an anemic 1.4% through the first three quarters of 2013.

A sharp increase in Venezuela's sovereign yields to more than 15% in early December from less than 10% in mid-May suggests the country's ability to access markets has been severely curtailed.