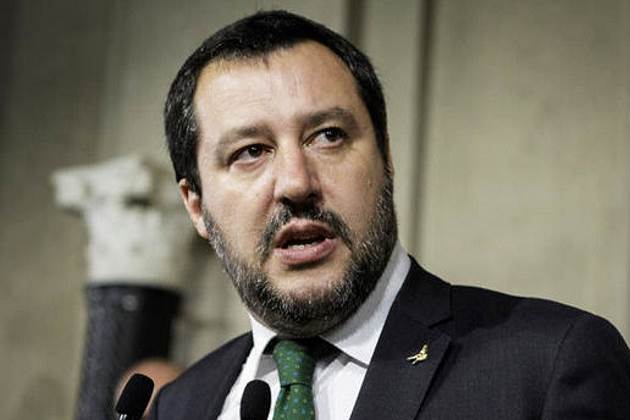 Europe   Interior Minister Matteo Salvini
The vessel run by Spanish non-governmental organization (NGO) Proactiva Open Arms rescued 59 people who were "adrift and at risk of dying" in the Mediterranean, the humanitatian group tweeted earlier in the day.

Salvini, who leads the far-right League party, tweeted in response that the NGO "hastily embarked (the) immigrants before a Libyan Coast Guard vessel could intervene."

"The ship, which is Spanish and flies a Spanish flag, is in the Libyan search and rescue (SAR) area with Malta as its closest port," Salvini continued. "They can forget about reaching an Italian port."

However, Malta has closed its ports to NGO vessels pending an investigation into the Lifeline, a humanitarian ship that rescued over 230 migrants.

Malta and Italy engaged in a diplomatic spat earlier this month over the Aquarius, another NGO vessel carrying 629 migrants that was ultimately allowed to dock in Spain.

The Italian minister, whose anti-immigrant and euroskeptic party made huge electoral gains in national and local elections earlier this year, added he intends to "stop the human trafficking mafia: the fewer people leave, the fewer will die."

Salvini has repeatedly accused NGOs of colluding with human traffickers. Deputy Prime Minister Luigi Di Maio from the populist Five Star Movement, which rules Italy in coalition with the League has accused them of being "migrant taxis".

However, earlier this month, a Palermo court shelved a criminal investigation against Proactiva and German rescue NGO Sea Watch. The court found that the NGOs acted in accordance with international law and had not colluded with traffickers, prosecution documents show.

Today's incident follows on a deadly migrant shipwreck off Libya, in which the bodies of three infants were recovered and over 100 people went missing.

"As more than 100 people are reported dead only today, EU governments continue to block and obstruct NGOs from doing the work they are failing to do. Any deaths caused by this are now at their hands," Doctors Without Borders (MSF) humanitarian NGO tweeted.

On Friday, a European Council summit agreed after marathon talks to set up migrant processing centers in Europe and abroad, on a voluntary basis.

The deal was struck after Italy, which due to its geographical location is on the frontlines of the migration crisis, threatened to veto all other resolutions unless the issue was addressed.

Critics argued that this was a hollow victory for Italy's new government.

"For the past year Italy has been fighting for binding commitments and not on a voluntary basis," former center-left premier, Paolo Gentiloni, tweeted Friday. "This way we have to trust in the goodwill of others, as requested by Visegrad (countries)."

Gentiloni was referring to the so-called Visegrad 4 countries - the Czech Republic, Hungary, Poland and Slovakia.

The four east European countries have refused to take in their share of migrants under a September 2015 relocation scheme, in which EU members committed to relocate 160,000 people from Italy and Greece by September 2017. ■