Staff writer ▼ | May 6, 2015
Paraguay's foreign affairs minister Eladio Loizaga said in Madrid that Mercosur could consider the possibility of a two-speed system in trade and cooperation negotiations with the European Union. 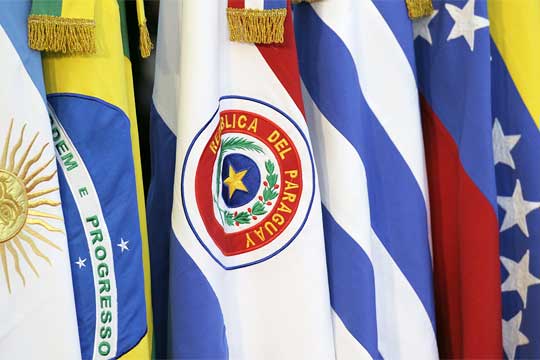 Negotiations   Mercosur-EU Negotiations started in 1999
The minister was the main speaker at the event organized by Casa de America and the Spanish government news agency EFE.

"Mercosur/EU Negotiations which started in 1999 have had their ups and downs and in 2012 were re-launched. Hopefully during the coming meeting next June in Brussels between the EU with Celac, Mercosur members on the sidelines will attempt to address the talks issue with the Europeans", said Loizaga.

On June 10/11, the Community of Latin American and Caribbean States, will be holding talks with the European Union to advance in trade and political issues.

"Some Mercosur members might be ready to begin negotiations with the EU, while the rest can join in time", said Loizaga in reference to the exchange of lower-tariff proposals with the EU, which is considered the next step of bilateral negotiations, but which has been delayed this time "because the 28 members of the EU have still to hammer out some differences; we in Mercosur have agreed on the proposal".

Paraguay is scheduled to take the pro tempore chair of Mercosur in the second half of the year, and according to Loizaga if needed. "Mercosur is prepared to consider a two-speed system".

Loizaga also pointed out that Mercosur is Paraguay's main trading partner while the EU second. However since beginning this month Paraguay will again have access to the EU market with prime beef , that relation could change.

Mercosur full members are Argentina, Brazil, Paraguay, Uruguay and Venezuela with Bolivia and Ecuador in the process of incorporation. ■