Staff writer ▼ | June 8, 2015
The Maldivian government said that it hoped to increase the tourist arrivals to the island to 1.5 million in 2016, a local media report said. 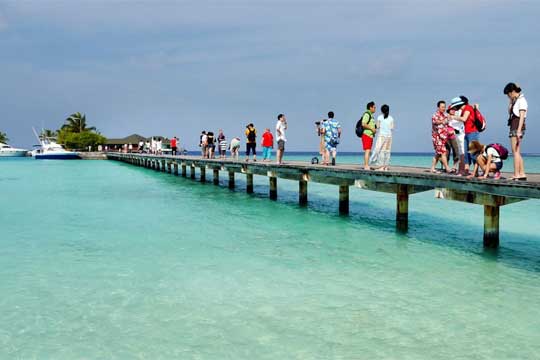 The government plans to hold an underwater festival, an international surfing event, a tree-planting programme and photography exhibitions in the Maldives and global locations as part of the campaign.

The Maldives will also host the renowned tourism fair, ITB Berlin, in March 2016, as part of the Visit Maldives Year campaign.

"I am confident that through this global campaign we can look forward to welcoming record numbers of holidaymakers to our beautiful shores in the Maldives," President Yameen said.

Maldives tourist arrivals have reached an all-time record level from February with the increase in Chinese tourist arrivals, data released by the Ministry of Tourism showed recently.

In February alone a record 120,468 tourists arrived in the Maldives from China which was a significant improvement compared to the negative growth registered in January.

Tourism Minister Ahmed Adeeb told journalists that tourism growth is expected to slow this year due to a decline in Russian arrivals. However, he said the Maldives is on track to achieve the goal of 1.4 million arrivals by the end of this year. ■