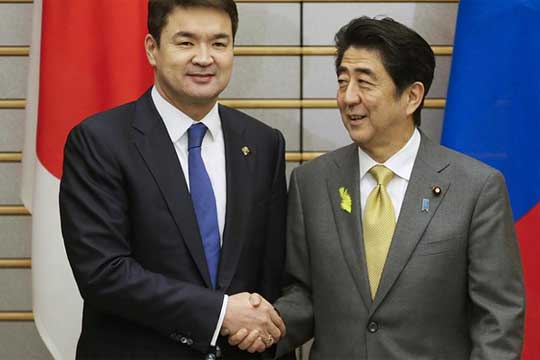 Cooperation   A free trade agreement
Prime Minister Shinzo Abe and his Mongolian counterpart Chimed Saikhanbileg signed the agreement at a summit in Tokyo.

As part of the "economic partnership agreement," Mongolia assured resource-scarce Japan of stable access to supplies of coal and rare earths. Japan has looked to Mongolia, India and other countries to help reduce its reliance on China for rare earths — minerals used in high-tech products and automobiles.

The two countries began free trade talks in 2012 and reached a basic accord last July.

Mongolia's imports from Japan, mostly vehicles, are roughly 16 times the size of its exports to Japan. The agreement signed Tuesday calls for Japan to scale back tariffs on its imports of Mongolian products such as cashmere. ■

Japan, Iran foreign ministers agree on investment deal
Japan and U.S.: TPP must be signed as soon as possible
Chinese mainland and Taiwan have high hopes about future