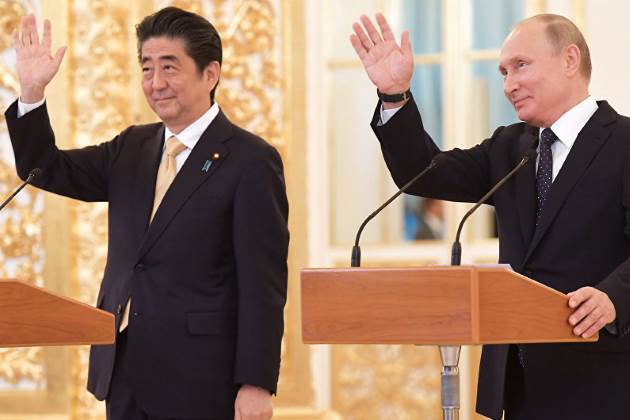 History   Shinzo Abe and Vladimir Putin
Japanese-Russian relations have long been complicated by the fact that the two nations never signed a permanent peace treaty after the end of World War II. The deal was never reached because of a disagreement over a group of four Kuril Islands — Iturup, Kunashir, Shikotan and Habomai — that are claimed by both countries. They are collectively referred to as the Southern Kurils by Russia and the Northern Territories by Japan.

"We have discussed the peace treaty during the talks. I believe it is important to continue patiently searching for the solution, which would meet strategic interests of Russia and Japan, and which would be accepted by the peoples of both countries," Putin stated following the meeting with Abe.

The Russian president added that Moscow and Tokyo were satisfied with the implementation of agreements on joint economic activities on the Kuril Islands.

He also said that a Japanese business mission will visit the Kuril Island in the second half of this year. ■

Republicans and Democrats against Trump's plan to help ZTE

FAW-Volkswagen, Ford to recall over 20,000 imported vehicles in China