Jamaica signs energy agreement with US

Staff writer ▼ | April 10, 2015
Jamaica could finally get the long-touted liquefied natural gas (LNG) project off the ground with the signing of an energy cooperation agreement with the United States Government. 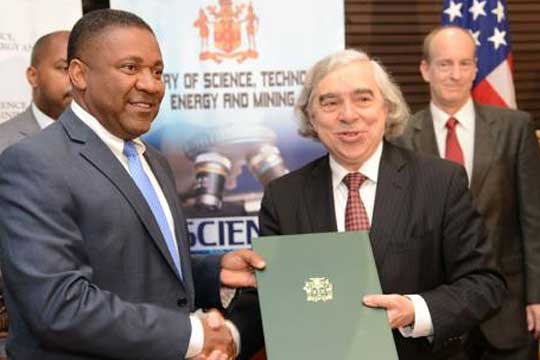 Energy cooperation   Jamaica was trying for many years to implement an LNG project
The Statement of Intent was signed between the US Department of Energy and Jamaica's Ministry of Science, Technology, Energy and Mining this morning.

Speaking with The Gleaner after the signing, Energy Minister Phillip Paulwell said the Government is optimistic particularly at the prospect of becoming a hub for distribution of LNG from the US to the rest of the region.

"Jamaica has attempted for many years to implement an LNG project, but we have been hindered because we just did not have access to liquefied natural gas. So, one of the achievements is the American support for us accessing natural gas, and in fact we have gone a little further in trying to identify Jamaica as a possible hub for allowing natural gas to be delivered to the rest of the region," said Paulwell.

The letter of intent also provides for technical assistance in energy conservation and fuel diversification.

The US Department of Energy was represented by Dr. Ernest Monitz, who is part of the delegation of US president, Barack Obama, who arrived in the island yesterday. ■