Staff writer ▼ | July 26, 2013
Iran offered sovereign guarantees for oil tankers shipping its crude to India as it has increased its oil exports to the South Asian country. 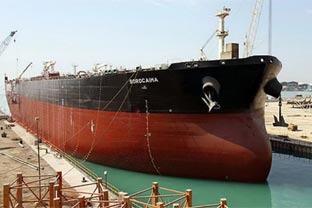 Iran offered sovereign guarantees for oil tankers shipping its crude to India as it has increased its oil exports to the South Asian country.


The offer has been made to India by Iran's Ministry of Industry, Mine and Trade. It covers liabilities between $50 million and $1 billion per incident through sovereign guarantee and the government special fund, writes Fars News Agency. The offered guarantee should compensate for the lack of insurance coverage for these shipments.

For the shipping liabilities of less than $50 million, an Iranian consortium led by the Central Insurance of Iran will provide the insurance coverage. India continued crude imports from Iran despite the western sanctions: India's crude oil imports from Iran have increased by 21.1 percent in June 2013 compared to a year earlier.

Essar Oil purchased 138,900 barrels per day (bpd) of Iranian crude oil in June, which marks a 16.3-percent growth compared to the previous month. At the same time, Indian oil refiner Mangalore Refinery & Petrochemicals is preparing to resume crude imports from Iran after it halted the procedure in April. ■