Staff writer ▼ | September 11, 2013
India and Laos signed an agreement under line of credit for four irrigation projects in three provinces in Laos for $ 30.94 million. 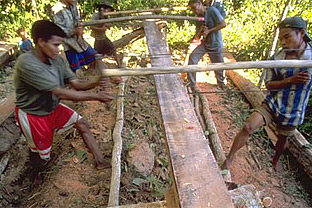 India and Laos signed an agreement under line of credit for four irrigation projects in three provinces in Laos for $ 30.94 million.


At the 7th India-Lao Joint Commission Meeting (JCM), the two sides also agrred to conversion of another line of credit to substitute the Nam Boun-2 hydro power plant by the extension of transmission lines to Thasala-Laksao amounting to $ 35.25 million.

The projects will contribute to socio-economic development in Laos, an official press release from the Ministry of External Affairs said.

The Indian side to the talks was led by External Affairs Minister Salman Khurshid while the Lao delegation was led by his counterpart, Dr. Thongloun Sisoulith, Deputy Prime Minister and Minister of Foreign Affairs.

India reiterated its preparedness to continue to provide assistance to the areas of water management and irrigation, energy generation and transmission and capacity building. It was recognized that India's soft credit and grant projects have improved the visibility of India and Indian products in Laos.

The Ministers identified agriculture, defence, ICT, culture, education, health, trade and investment promotion, mining as priority areas of cooperation between the two countries that would give further impetus to bilateral relations.

A number of new initiatives were taken to promote people-to-people contacts, training and scholarship opportunities and expansion of private sector participation in trade and investment, as well as in health and education, the release said. ■

Ralf Hinkel hands over chairmanship of Mobotix board

Bonnie Howard appointed to BMO Financial board of directors