Staff writer ▼ | July 2, 2014
India and China signed three agreement including one that allows Chinese investment in industrial parks and zones. 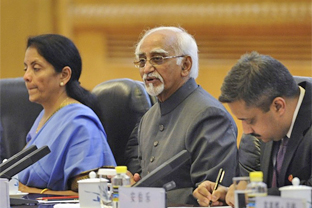 India and China signed three agreement including one that allows Chinese investment in industrial parks and zones.


The Memorandums of Understanding (MoUs) were signed during Indian vice president Hamid Ansari's visit to China in the presence of his counterpart Li Yuanchao. The MoU on industrial parks targets attracting Chinese investments in India and laying the framework for such investments.

The countries will set up an Industrial Park Cooperation Working Group, which will be equally represented by both nations. The group would look for ways to cooperate under this agreement and periodically review progress.

"There is enough space in the world for the development of India and China, and the world needs the common development of both countries. As two large developing countries, our common interests far outweigh our differences," Mr. Ansari said in a speech at the Chinese Academy of Social Sciences in Beijing.

India expects four Chinese industrial parks where a variety of goods could be manufactured. ■