IMF lowers growth in Uruguay to 3%

Staff writer ▼ | March 4, 2014
The International Monetary Fund lowered its forecast for economic growth in Uruguay this year to 3% from its previous estimate of 3.3%, the IMF's deputy managing director Naoyuki Shinohara said. 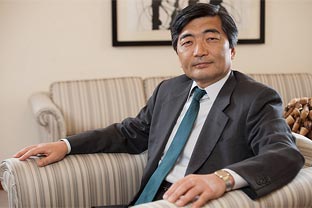 The International Monetary Fund lowered its forecast for economic growth in Uruguay this year to 3% from its previous estimate of 3.3%, the IMF's deputy managing director Naoyuki Shinohara said.


Mr. Shinohara told reporters that the revision is due to lower growth expected in Uruguay's neighbors Argentina and Brazil and lower prices for commodities and Uruguayan exports.

Last October the IMF estimated gross domestic product would expand by 3.3%. "Growth is a little bit slower because of the impacts that come from neighboring countries," said Mr. Shinohara. However, "we think the economic situation in Uruguay is solid." Shinohara said that if this is confirmed, Uruguay's exchange rate could act as a shock absorber for the situation, but nevertheless the country is 'in good conditions to keep sustained robust growth'.

"It has diversified exports and also debt exposure. The country has sufficient international reserves to dampen any excess of volatility. However it is essential that the government combats inflation, bringing it down to the target range, and to that respect Shinohara said the IMF “supports a more restrictive monetary policy."

Currency devaluations in Argentina and Brazil in recent months have softened domestic demand, curbed investments and spread uncertainty in the region.

Last week Uruguay also lowered its forecast for 2014 growth to 3%, down from its previous estimate of 4%. The government expects GDP to have grown 4% last year Shinohara during his visit to Uruguay met with vice president Danilo Astori; economy minister Mario Bergara and the Central bank president Alberto Grana.

The IMF official insisted Uruguay needs structural reforms to improve infrastructure and increase the efficiency of labor markets, which would have a positive effect for the country's competitiveness and the economy's resilience with impact on productivity and investment. ■