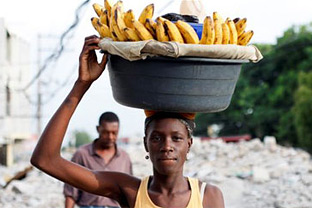 Agri-Success, a Haitian subsidiary of Florida-based Haiti Originale, is launching a program to develop sustainable high-quality banana production in Haiti.


During the next twelve months an analysis will be conducted in the country to determine banana production potential. The goal is to develop a large scale banana operation that will serve as a foundation for the sector and to open new possibilities to growers.

The new banana project is the result of collaboration between Haiti Originale, the Haitian Ministry of Agriculture, Natural Resources and Rural Development (MARNDR), and the Inter-American Development Bank (IDB). Dole Food Company was a technical adviser. This program epitomizes the concept of Private-Public Partnerships (PPP) which should result in the reemergence of a private-sector industry in Haiti.

Haiti Originale was established following the devastating January 12, 2010 earthquake to provide a platform for sustainable development and to create jobs in Haiti. In addition to project development and investment promotion, Haiti Originale promotes Haiti and its products through the use of its par Haiti - pour Haiti (from Haiti - for Haiti) logo, allowing both consumers and market partners to recognize that the purchase of Haitian agricultural and manufactured products provides Haitian farmers.

One campaign to rule all tourists

Iran ready to discuss oil supplies to Belarus
Philippines partially lifts workers deployment ban to Kuwait
Nigeria suspending operations of secure anchorage
France to Britain: Give us fish or no money for you