Staff writer ▼ | October 15, 2014
A German submarine delegation is in Canberra to demand an open competition for the nation’s biggest ever defence contract, a new navy submarine. 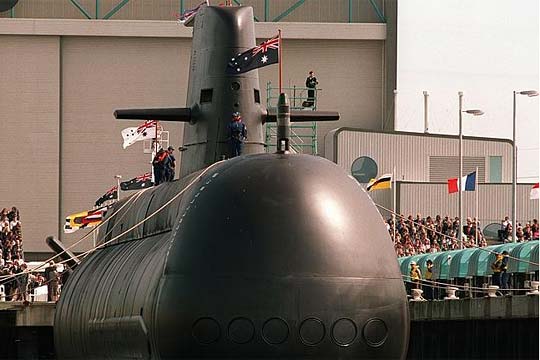 After Japan   The battle for submarine
German giant ThyssenKrupp Marine Systems (TKMS), the parent company of leading submarine builder HDW, has launched an aggressive bid to head off Japan for the multi-billion dollar job. And in good news for thousands of shipyard workers at the ASC yard in Port Adelaide and elsewher

e around the nation, TKMS said it would be happy to build the boats in Australia. The company has built more than 160 diesel powered submarines and it has promised the Abbott Government that it could deliver 12 "ready for war" conventional submarines to replace the controversial Collins Class boats for $20 billion. It said the boats could be either built at its shipyard in Kiel, Germany or at the ASC yard in Adelaide "risk free under a fixed price and fixed delivery contract".

Navy shipbuilding expert John White told a Senate inquiry that the Soryu option was "challenging" because Japan had never exported a submarine. He also called for the establishment of a Submarine Construction Authority to oversee the vital project.

TKMS has guaranteed through-life support costs at between 10 and 20 per cent of the cost for Collins saving taxpayers billions of dollars. The final decision on the submarine selection process will be included in the government’s 2015 Defence White Paper due out mid-next year.

Chief Financial Officer with TKMS Dieter Rottsieper is in Canberra this week on a high-level lobbying mission. ■