Staff writer ▼ | November 26, 2014
France has delayed "until further notice" the delivery of a warship to Russia because of the crisis in Ukraine. 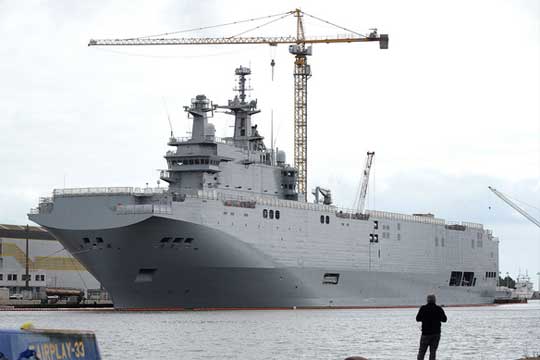 Vladivostok   France changed its mind
President Francois Hollande said the "current situation in eastern Ukraine still does not allow for the first" of two Mistral-class vessels to be handed over to Moscow. The "Vladivostok" was scheduled for delivery to Russia in late October or early November. A second vessel, the "Sevastopol," was launched earlier this month for a planned delivery next year.

The Russian Defense Ministry warned that France will have to pay dearly if it does not deliver the amphibious assault ships.

"France will have to pay us damages and return advance payments," Deputy Defense Minister Yuri Borisov said on state TV. "If that is the final decision, the price for France will be higher than the cost of those Mistrals and higher than the compensation that Russia will receive," Russia's EU Ambassador Vladimir Chizhov told the Interfax news agency.

Chizhov said that Russia "is not going to beg Paris" for the warships. "After all, we lived without the Mistral and we will live on, especially now that we know perfectly how to make them," he said, a remark that suggested Russia has acquired sufficent knowledge about the ships to build similar vessels itself. ■

E-visa for India to be announced for 43 countries

California to ban sale of new gasoline vehicles by 2035
Hundreds of thousands of jobs to be offered in Bangkok
Minister: Zambia's power shortages to end by March 2021
Secretary Chao announces $335 million in infrastructure grants to America’s airports