Staff writer ▼ | April 4, 2014
More than 30 companies have expressed interest in the auction for concession of Highway SP-099 (Tamoios Highway), in the state of Sao Paulo. The tender is scheduled to take place in July at the latest. 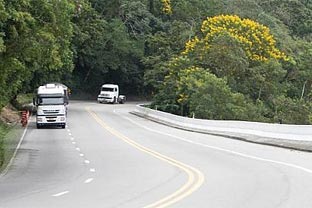 More than 30 companies have expressed interest in the auction for concession of Highway SP-099 (Tamoios Highway), in the state of Sao Paulo. The tender is scheduled to take place in July at the latest.


According to the Sao Paulo State Transport Agency (Artesp), more than 30 companies have collected the documentation to bid for the tender.

The winner will carry out duplication works in the highway’s mountain stretch, renovation in the flat stretch, and manage the highway for the next 30 years. Nearly R$ 4 billion ($1.76 billion) should be invested during the period.

Similar to other tenders floated in the state of Sao Paulo, foreign companies will be eligible for the Nova Tamoios auction. This was the case with the Anchieta-Imigrantes system auctions, which connects the city of Sao Paulo and the southern coast of the state; the Anhanguera-Bandeirantes system auctions, connecting the capital to the countryside, and the auctions of the Rodoanel ring road, around the Greater Metropolitan Area of Sao Paulo, among others.

The concession provides for duplication of the mountain portion comprehended between kilometres 60.48 and 82, and the operation, maintenance and conservation of the stretch between kilometres 11.5 an d 83.4, as well as roundabouts in Caraguatatuba and Sao Sebasti?o, northern coast cities to which the traffic from the capital and the Paraíba valley flows via the highway.

Duplication of the mountain stretch will span approximately 21.5 kilometres, of which 12.7 will be tunnels. The road will include the longest tunnel in Brazil, at 3.675 kilometres. The flatland stretch between kilometres 11.5 and 60.48, has been duplicated and was delivered in January this year.

The concession scheme for this project is the sponsored concession. The toll charged from users will not suffice to repay the investment made by the operator. Therefore, the state will have to make annual payments so the winning company does not incur losses, and so the toll is not too high.

The government of Sao Paulo will transfer a maximum of R$ 156.8 million per year to the winning company. The bid that demands the lowest payment from the state government will win the auction.

There will be toll booth plazas at kilometres 15.7 and 56.6 of the flatland stretch, and another one in the Caraguatatuba roundabout. The toll will be R$ 0.077 per kilometre in single-lane stretches, and R$ 0.108 in double-lane portions. It will be charged starting on the contract’s second year.

Interested parties are required to provide proof of former management and operation of highways with an average daily traffic of 8,000 vehicles per hour, among other requirements. ■

Zurich elects Christoph Franz to the board of directors