EU willing to give another €1 billion to Ukraine 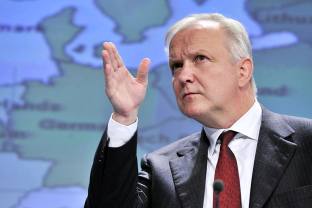 
The new MFA programme, expected to be approved by the EU's Council of Ministers in the coming weeks, is part of the package of support to Ukraine announced by the European Commission on 5 March and endorsed by the European Council on 6 March. It is intended to assist Ukraine economically and financially in view of the critical challenges it is facing, notably a very weak and rapidly worsening balance-of-payments and fiscal situation, which is being worsened by the current crisis.

Olli Rehn, Vice-President of the European Commission responsible for Economic and Monetary Affairs and the Euro, said: "It is in the essential interest of Ukraine and of the EU to maintain peace and political and financial stability in our continent. This financial aid will help in stabilising the worsening financial situation in Ukraine and therefore will be one vital part of achieving a solution to the crisis."

The proposed EU MFA is designed to help Ukraine cover part of its urgent external financing needs in the context of the stabilisation and reform programme currently under preparation with the help of the International Monetary Fund (IMF). The proposed assistance is aimed at reducing the economy’s short-term balance of payments and fiscal vulnerabilities.

The disbursement of the assistance would be conditional on the successful implementation of a financing arrangement that the Ukrainian authorities are expected to conclude with the IMF and on specific economic policy conditions that the Commission and the Government of Ukraine will agree on, both in the coming weeks.

The policies that the Commission considers important to support through the proposed assistance comprise urgent fiscal consolidation and external stabilisation measures, as well as structural reforms aimed at improving overall macroeconomic management, strengthening economic governance and transparency and improving conditions for sustainable growth.

The proposed new €1 billion programme would be implemented in parallel with the existing programme of €610 million, which has been available since 2010 but has not yet been released. ■

The market for financing new aircraft to remain strong