Staff Writer | November 18, 2016
The draft agreement for Lazuli route was finalized between Afghanistan, Turkmenistan, Azerbaijan, Georgia, and Turkey to link Afghanistan with Black and Mediterranean Sea. 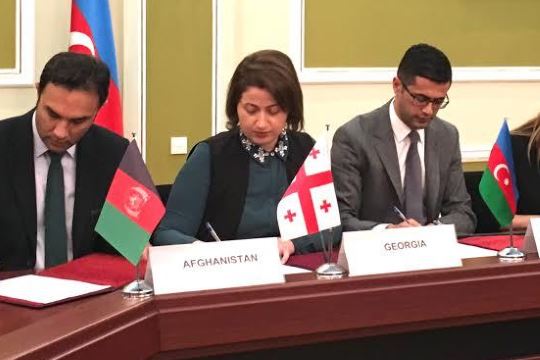 Transportation   Lazuli route
The Ministry of Foreign Affairs (MoFA) said the draft agreement was finalized during a meeting at the ministry of transport of Azerbaijan. MoFA further added that the Lazuli route is an initiative of the Afghan government that will link the country to Black Sea and Mediterranean.

According to MoFA, the transit route will bring a considerable reduction in time and cost of transportation besides opening transit route to South Asian Countries to have access to Central Asia, Caucasus, and European countries.

With the finalization of the draft agreement for Lazuli route, the top officials of the mentioned countries are now able to sign and execute the agreement, MoFA added.

This comes as a railway network was inaugurated in mid-October this year to help connect Afghanistan to European countries and China via Central Asia.

The railway network, Lazuli railway, will link Afghanistan with the European countries and China via Turkmenistan, Kazakhstan, Azerbaijan, Georgia, and Turkey. ■