Staff writer ▼ | February 21, 2014
Denmark welcomed China being more involved in the Arctic, particularly in sectors such as mining, fishing and sea route development. 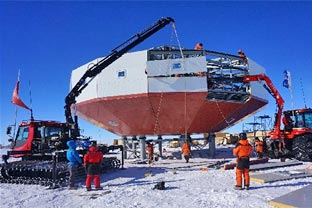 Denmark welcomed China being more involved in the Arctic, particularly in sectors such as mining, fishing and sea route development.


Danish Arctic Ambassador Erik Vilstrup Lorenzen and Greenlandic Deputy Foreign Minister Kai Holst Andersen made the remarks in an interview with China Daily in Beijing. They are in China seeking more opportunities for cooperation, focusing on fishing products, mining and scientific research.

Greenland is part of Denmark. According to the deputy foreign minister, 90 percent of Greenland's exports are seafood products.

China's huge market is very important for the island, and it hopes China can get more involved in the projects, he said. China and Denmark can also cooperate in scientific research such as the study of ice sheets, Mr. Andersen added.

China and Denmark can work together to explore new sea routes, said Mr. Lorenzen, who is in charge of the country's Arctic policies and affairs.

According to scientific research, the Arctic is expected to become ice-free in coming decades as temperatures there rise twice as fast as in the rest of the world. So there is an increasing possibility of a much shorter commercial sea route and a longer navigable period in the Arctic Ocean.

"The shorter and safer sea route through the Arctic means lower costs for shipping companies and a shorter distance from China to trading partners like Europe," said Xia Yishan, a researcher on energy strategies with the Chinese Academy of Social Sciences. ■