Colombia to go eco-friendly with coca

Staff writer ▼ | May 12, 2015
Colombia said it will stop using a controversial herbicide glyphosate to destroy illegal plantations of coca, the raw ingredient for cocaine. 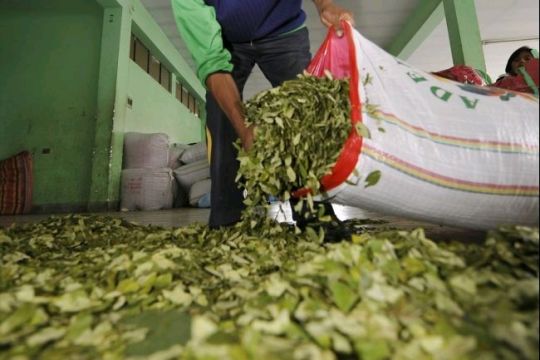 Ecology   No glyphosate in Colombia
The decision follows a warning by the World Health Organization (WHO) that glyphosate is "probably carcinogenic". The product has been used in U.S.-sponsored crop-spraying anti-narcotics programmes in South America.

President Juan Manuel Santos has said Colombia will need to find other mechanisms to combat coca production. Anti-narcotics officials in Colombia will have until October to prepare an alternative plan.

"I am going to ask the government officials in the National Drug Council at their next meeting to suspend glyphosate spraying of illicit cultivations," Santos announced.

"The recommendations and studies reviewed by the Ministry of Health show clearly that yes, this risk exists," he added, making reference to the WHO warning on cancer, but Colombia will not "lower the guard" in its combat against drug trafficking, he said.

The institute estimated that the economic growth in 2015 will be between 3.1-3.2 percent, down from the previous forecast of 3.6 percent.

While noting that 18.7 percent of the national income in 2013 came from the energy sector, Central Bank Governor Jose Uribe said the sharp drop in oil prices on the global market has adversely affected the Colombian economy, but the impact is not as great as in 2009 when 1.7 percent of growth was recorded.

The official also said food prices were expected to stabilize during the second half of 2015 and inflation will be between 2-4 percent for the year. ■

A third of British workers don't take their holidays