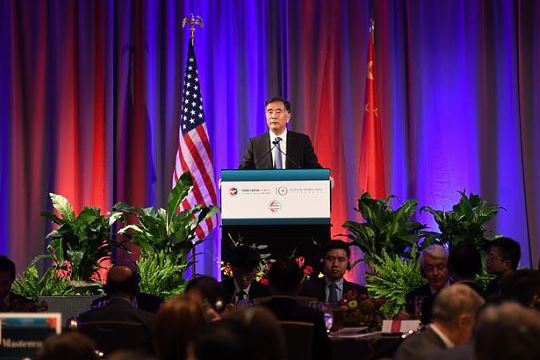 Trade   300 million people in the middle-income group
"The Chinese and U.S. economies do have a competitive dimension, but there is far greater complementarity than competition," he said at a business luncheon in Washington ahead of the first China-U.S. Comprehensive Economic Dialogue, which is slated for Wednesday.

As the Chinese economy continues to grow at a medium-high speed and climb higher on the value chain, China's traditional industries are transformed and upgraded at a faster pace, and emerging industries flourish, he said.

Thanks to that, "there is huge market potential to tap in U.S. export of advanced technologies, key equipment and critical parts to China," the vice premier pointed out.

"Unfortunately, American businesses have not had their fair share of the 'cake' due to outdated U.S. regulations on export control," he said, noting that while U.S. high-tech exports to China accounted for 16.7 percent of China's total imports of such products in 2001, the percentage dropped to 8.2 percent last year.

Taking integrated circuits (IC) as an example, he said China's IC imports amounted to a whopping $227 billion last year, more than the imports of crude oil, iron ore and primary plastics combined, but only 4 percent came from the United States.

Citing an op-ed by the Carnegie Endowment for International Peace last April, Wang said that if the United States were to liberalize its export barriers against China to the same level as those applicable to Brazil or France, the U.S. trade deficit with China would narrow by up to 24 percent and 34 percent respectively.

He also stressed that China now has 300 million people in the middle-income group and their demand for quality U.S. goods and services is swelling by the day. ■