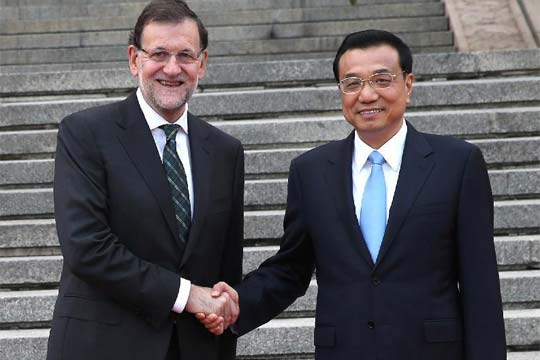 The Chinese government attaches great importance to relations with Spain, and is ready to maintain high-level engagement, continue to understand and support each other's core interests and major concerns, expand substantial cooperation, and maintain close communication and coordination on international and regional affairs, Li said in the talks.

He urged the two sides to continue to expand bilateral trade and promote a balanced and sustained trade growth, strengthen cooperation in such areas as energy, finance, biological medicine and aerospace, strengthen cultural exchanges and two-way language teaching, and send more students to study in each other.

The Chinese government will encourage companies to invest in Spain and hopes Spain could provide more legal and policy guarantees as well as visa facilitation, the premier noted.

Rajoy said Spain is willing to further reciprocal cooperation with China, which is in favor of its own economic growth. Spain welcomes more Chinese tourists and will provide visa procedures within 48 hours, he added.

Li also spoke positively of the role played by Spain in promoting the development of China-EU relations.

He said China will work with Spain to implement the China-EU 2020 Strategic Agenda for Cooperation, push forward the China-EU investment agreement negotiation and feasibility research on China-EU free trade area, jointly promote the liberalization and facilitation of trade and investment, and oppose protectionism. ■

Rajoy says the answer is in lower wages
Spain to boost cooperation with China under Belt and Road
Iran, China sign MoU on banking cooperation