China and Pakistan to open link to the Arabian Sea

Staff writer ▼ | July 8, 2013
China and Pakistan will develop a transport link from northwestern China through Pakistani mountains to the Arabian Sea, a route that should boost Pakistan growth and cut shipping times. 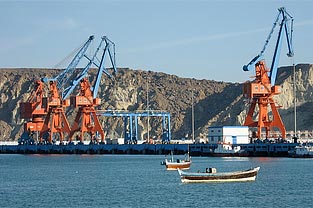 China and Pakistan will develop a transport link from northwestern China through Pakistani mountains to the Arabian Sea, a route that should boost Pakistan growth and cut shipping times.


A broad agreement for the "economic corridor" was among eight agreements signed following a meeting between Chinese Premier Li Keqiang and Pakistani Prime Minister Nawaz Sharif in Beijing. The transport route is a long-term plan to connect the Chinese city of Kashgar to the port of Gwadar, more than 2,000 kilometres away across the Karakoram mountains and Pakistan's Baluchistan province.

Another agreement is about a fibre optic cable from the Chinese border to the Rawalpindi in Pakistani. The cable will boost Pakistan's access to international communications networks. China is set to provide 85 percent of the financing for the three-year project's $44 million budget and Pakistan will cover the rest.

The visit is Pakistani Prime Minister Sharif's first to China since he returned to power last month. The two countries cooperate closely in diplomatic and defence affairs, and share a common rival in their mutual neighbour and occasional military opponent India.

China provides Pakistan with aid and foreign investment, while Islamabad offers Beijing important diplomatic backing in the face of Muslim-majority nations who might otherwise criticise China's handling of its Muslim population.

Pakistan is hoping to attract greater Chinese investment to revive its economy, while expanding two-way trade that exceeded $12 billion for the first time last year. At the same time, China wants Pakistan to crack down on insurgents from China's Muslim Uighur minority who have taken refuge in Pakistan's northwest alongside Al Qaida-linked extremists.

Located just outside the mouth of the Arabian Gulf, Gwadar has the potential of cutting the 12,000-kilometre route that Mideast oil supplies must now take to reach Chinese ports and it could provide an outlet for copper and other resources that Chinese firms plan to mine in Afghanistan, while offering a base for China's navy to operate in the Indian Ocean. ■

It is hard to find optimistic signs for air cargo