Canada could have a larger surplus than forecast

Staff writer ▼ | January 6, 2014
Government of Canada could unveil "a larger surplus" than it has anticipated when it gets the books back to balance in 2015, Finance Minister Jim Flaherty said. 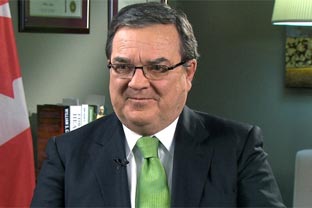 Government of Canada could unveil "a larger surplus" than it has anticipated when it gets the books back to balance in 2015, Finance Minister Jim Flaherty said.


In an interview with CTV's Question Period, Mr. Flaherty said he is confident that the government will fulfill his recent promise to wipe out the budget deficit for the 2015-16 fiscal year. He added, reports CTVNews, that the government will achieve surplus largely because "we're controlling our own departmental spending," and not by reducing transfers to the provinces or cutting programs or benefits.

When asked if the Canadian economy could end up in better shape than expected, especially if the United States' economy continues to get stronger this year, Mr. Flaherty said: "We could be. We could have a larger surplus than we anticipate, but we will have a surplus. We don't really have a debt issue."

"House builders and condo builders were telling me about young people graduating and buying way more house than they needed and driving an Audi. I think we used to wait a little longer before we got big houses and fancy cars, so that worried me.

"But as I say the market is calming somewhat, so I'm less concerned than I was. And when you look at debt to net worth, as long as the housing market remains relatively strong, we don't really have a debt issue" said Mr. Flaherty. ■