Staff Writer | November 15, 2017
Brazil has left its economic crisis behind and is back on the development track due to the government's right strategy, Brazilian President Michel Temer said in a signed article published on Wednesday. 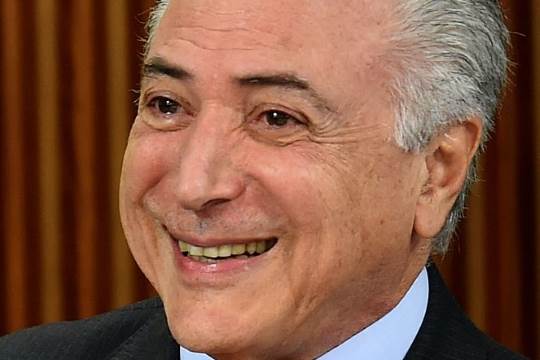 LatAm   Brazil is back on track
"The economic recession in Brazil has been reversed and the Brazilian economy has grown for the last two consecutive quarters. Some analysts have forecast a 1 percent growth in GDP in 2017," Temer said in the article entitled "Brazil is back on track," which is published on the website of Xinhua News Agency.

Over 18 months ago, Brazil faced the most severe economic crisis in its history along with its deep social impacts on the people, according to Temer.

"Faced with this kind of challenge, I have put forward a transformation agenda without recourse to populist measures," said Temer, adding that the agenda comprises the broadest set of structural reforms in the past 30 years based upon the pillars of fiscal balance, social responsibility and increase in productivity.

Brazil's inflation shrank from about 10 percent in May 2016 to 2.54 percent in September 2017, which stands below the inflation target. Purchasing power got better with a real increase of more than 6 percent in wages, according to the article.

Temer pointed out that the success of the agenda has also been reflected in employment recovery with an increase in the employment rate indexes.

"The accumulated surplus for 2017, measured by the General Register of Employment and Unemployment Persons of the Ministry of Employment, is of 163 thousand jobs created, in comparison to the loss of 448 thousand jobs between January and May 2016," reads the article.

The president stressed that all the results have shown the strategy put forward and implemented by the government is the right one.

"The next step will be the continuity of reforms, which will ensure solvency and survival of the system, in addition to removing privileges," Temer said.

"With the indispensable support of the National Congress, of workers and the business community, we are putting Brazil back on track," he added. ■

Sunny future for renewables thanks to China