Staff writer ▼ | July 10, 2013
After protests of Brazilian medical associations, the Brazilian government has halted plans to import a contingent of Cuban doctors. 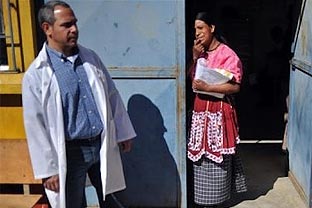 After protests of Brazilian medical associations, the Brazilian government has halted plans to import a contingent of Cuban doctors.


The government is looking to hire physicians in Spain and Portugal, the Health Ministry said. The plan to bring in Cuban doctors sparkled protests, asking about their qualifications. Brazilian medical associations argued that standards at Cuba's medical schools were lower than in Brazil and equivalent in some cases to a nursing education.

Brazil was rocked last month by massive protests fueled by frustration with a high cost of living and bad state of public transportation, education and health services. President Dilma Rousseff is now trying to expand public services, crack down on corruption and hold a national vote on political reform.

Ms. Rousseff also unveiled a health plan to fill the lack of physicians in rural communities and poor parts of Brazilian cities by hiring more local and foreign doctors.

"Every Brazilian must have access to a doctor. Brazil is short of doctors. If we don't have enough in Brazil, we will look for good doctors wherever they are," said Ms. Rousseff. Then the government said it was in talks with Cuba to hire 6,000 Cuban doctors to serve in remote parts of the country.

However, after protests, Brazil's Health Ministry will hire foreign doctors where needed on an individual basis. Each foreign doctor, a ministry official said, will individually apply to work in Brazil.

"We never reached a deal with Cuba. Now the priority is Spain and Portugal," the official said.

Cuban doctors can apply, he said, but ads offering doctors work in Brazil will be posted in Spain and Portugal, not in Cuba. The doctors will be paid 10,000 reais ($4,400) a month. ■

ECOtality adds Brandon Hurlbut to board