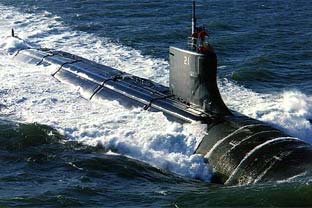 Australia will be the first country to benefit from Japan's new non-pacifist constitution when Japanese Prime Minister Shinzo Abe signs a landmark military technology deal with Tony Abbott in Canberra.


The agreement will allow both nations to jointly develop submarine technologies and is the first step in a possible joint project to build Australia's next-generation submarine. Since the country's defeat in World War II, Japan has been forbidden from rearming or from conducting military operations overseas.

The growing military power of China and increasing regional uncertainty have encouraged the U.S. to allow Japan to tear up its post-war constitution. That means countries such as Australia are free to enter into new military alliances with its former enemy.

The first cab off the rank will be the technology-sharing agreement on marine hydrodynamics to be inked in Canberra.

A training deal will follow that could see large numbers of Japanese troops training on Australian soil.

Under the agreements Japanese-designed submarines could be built under licence in Adelaide or even straight off the shelf from Japan.